The bomb throwing President of the Baltimore City FOP, Gene Ryan, had his usual calm, deliberative response to the news of the City’s settlement with the family of Freddie Gray: 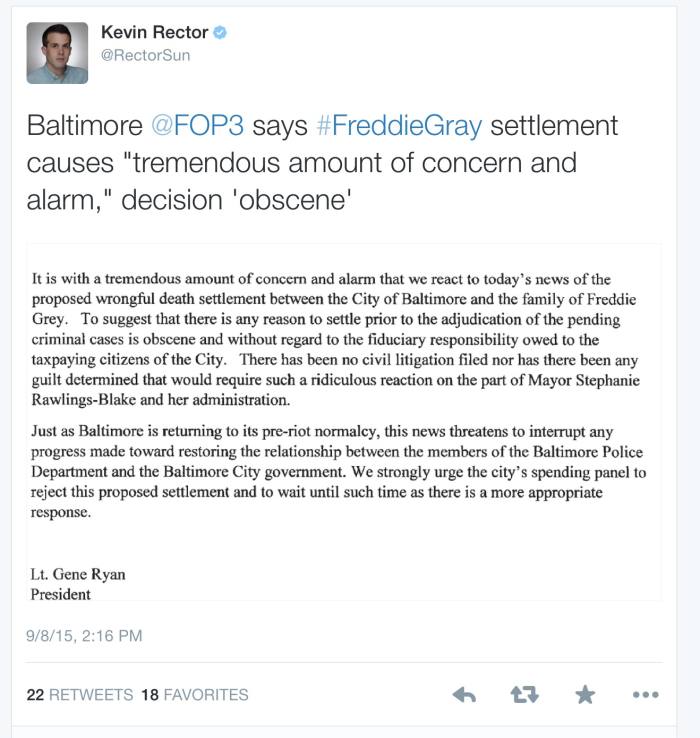 Ryan is banking on ignorance and bigotry in order to fan the flames of tension in the City in advance of the decision whether to keep the criminal cases in Baltimore or ship them elsewhere for trial. Criminal and civil cases are completely separate things - the standard of proof required is different in each case, for one major difference. And the City has interests that are not always in precise alignment with its police officers, no matter how much Ryan wishes it was so. The fact that no lawsuit has been filed is very common in cases like this - it is the desire to settle before all the allegations are made public that drives cities and states to settle these cases before suit is filed, not after. And the amount, while high, is only slightly more than what New York paid to the family of Eric Garner.

I have no doubt that Gene Ryan knows all of the above, and is doing what he’s doing in a deliberate effort to increase, not diminish, the tension in Baltimore. In one sense, it’s part of his job to look out for his officers. I get that. But the level of vitriol that he has spewed from the outset of this matter is more appropriate to a George Wallace or a Strom Thurmond or a small town southern sheriff in the 1960s and 1970s. It’s not appropriate to the circumstances of a city like Baltimore in 2015, it’s inflammatory and confrontational, and it’s repugnant.