Here in Montgomery County, we have increasing income inequality, an ever widening achievement gap and overcrowding in our schools, issues of race in our criminal justice system, skyrocketing rents caused by the development decisions we’ve made over the past decade that are squeezing many tenants right out of the county altogether, inequities and access to health care for women, looming budgetary shortfalls at the county level that have us facing significant tax increases just to stand still, and enormous choices to be made regarding both the next generation of transit (Purple Line) as well as the one after that (BRT and CCT). That’s just a brief, off the top of my head Saturday grab bag of big issues.

What is the burning issue of the day this week? Not any of those meaty, important issues. Instead, the food fight is over privatizing Montgomery County’s monopoly on liquor sales. Now, I am no fan of the county’s liquor program. It’s inefficient and it doesn’t provide a lot of what customers want and special orders, whether for individuals or for restaurants, are poorly handled and often ignored. Nobody was more annoyed about these problems than my late wife - ask me some time about her efforts to get the wine she wanted for our son’s bar mitzvah back in 2008. It wasn’t pretty. Words were spoken, voices were raised, etc. Wine was a sacred thing in our house, and not getting what she wanted was an outrage. Things definitely need to get better.

But there’s a big difference between saying the system needs to get better and doing away with it entirely and allowing private liquor sales. Those who advocate for these kinds of drastic changes essentially are pissed off that they have to drive to DC or Virginia to buy their cheap hooch. That’s not a good basis for making public policy. They ignore the reality that the current system has been around for over 80 years, since the end of Prohibition. Even poorly conceived ideas ought not to be undone without careful consideration, especially when they touch on such a wide variety of significant issues. Moreover, the current system generates over $34 million in annual net revenue to the county, a substantial sum, especially for a county already looking at substantial tax increases in the coming years. Additionally, there is the matter of several hundred jobs that would be put at risk, not to mention the fact that the discount private entities drive their costs down at least in part through paying their employees lower wages and benefits.

What we’ve had is a steady drumbeat of demands to tear down the system now, consequences be damned. Peter Franchot, Bill Frick, David Lublin, Adam Pagnucco, among others, all argue for blowing up the current system and allowing private liquor sales, based primarily on “giving the people what they want.”

Earlier this year, the County Council, after consideration of the complexities of the matter, proposed allowing special order sales from restaurants (particularly wine) to be opened up to private distributors. The DLC has also proposed opening more stores around the county.

Several members of the County Council, as well as County Executive Ike Leggett, are opposed to privatization.

On Thursday, Comptroller Peter Franchot proposed a bill to open up the system to private actors.

“Look, we’re not going to demand that the county end its monopoly—we’re simply going to call their bluff and ask that the private sector be allowed to compete, both for the distribution and retailing of spirits and distribution of beer and wine,” Franchot said in an interview Wednesday. “I would anticipate that in a very short period of time, several years at the most, restaurants and consumers would move—organically, so to speak—from the county monopoly to the private sector.”

Outlining his proposal, Franchot, a Takoma Park resident, declared, “This would be a very efficient…approach to a problem that that bedevils the county right now, because everyone knows the restaurants are not happy, everyone knows the consumers are getting gouged, and everyone knows that Montgomery County stands almost alone as far as having the most Prohibition-type system.”

It took less than a day for state legislators to get in on the action, in the form of a bill offered by Delegate Bill Frick of Bethesda.

Six state legislators from Montgomery County want voters to decide next November whether private alcohol distributors should be allowed to compete against the county’s Department of Liquor Control.

District 16 Del. Bill Frick, one of the bill’s co-sponsors, said the proposal is similar to the one Comptroller Peter Franchot is now pitching except that it includes the referendum.

I’ve read the bill, and it has major problems. There’s no restriction on the number of either wholesale or retail licenses to sell liquor. So any current licensee could pony up the $1,000 license fee and be eligible to sell liquor. Imagine a county full of discount liquor stores.

Second, there’s no apparent restriction on the location of such stores - while I haven’t looked at the county zoning law yet, I have to believe it doesn’t address these issues, since the county liquor monopoly dates back to a time before there WAS a zoning code. So look forward to liquor stores everywhere - near schools, near churches, near anywhere where a convenience store can now go, liquor can be sold there.

Third, the proposed license fee of $1,000 is absurdly low. The profit that discount liquor can make is high. Earlier estimates suggests that the sale of the county monopoly might fetch tens of millions of dollars. And now we want to sell it for $1,000 a pop? That’s a complete giveaway.

There’s a further question whether this is a proper law for a referendum in any event. Liquor laws are barred from being taken to referendum under the Constitution by the voters - should the General Assembly be allowed to send a local bill (question about that, too) to referendum in a manner that the people may not under the Constitution? I haven’t done enough research to know for sure, but the issue is definitely out there.

Most troubling, however, is the unwillingness of reform proponents to even grant the existence of the issues on the other side. David Lublin has written 12 blog posts on the alcohol issue since July 31, a time during  which there were 41 total posts. At least the blog posts had some semblance of civility and balance, especially when compared to his ugly and anti-union comments yesterday on the Bethesda Magazine story about Bill Frick’s proposed legislation described above. So much as I’d rather not spend any more time on this guy, I feel like I have to.

There was a prior comment that raised the question of Bill Frick’s wife, Bethany, having previously  worked for Total Wine, one of the potential beneficiaries of any privatization effort. Here’s that comment:

I don’t agree at all with the questioning of Delegate Frick’s motivations, but bringing up the issue generally is hardly controversial. Given the nature of Maryland’s part-time legislative scheme (I wrote about this last week), potential conflicts for legislators with their own or their spouses’ employment are constant and part of the scenery.

David Lublin, however, was outraged, so much so that he did precisely the same thing to Lisa Gebbia that he accused her of doing to Bill Frick and his wife, only worse.

She works for a firm that does work for UFCW. She’s an advocate. And that’s worse optics than a delegate whose wife is in the liquor business directly? Especially when Bethany Frick now works for Diageo, another alcohol distributor with local connections? Still isn’t relevant at all? But work for a union, and oh boy, now we have a problem. Interesting pair of glasses you got there, Dave. They apparently only see what you want them to see. And Gebbia isn’t making the decisions here - she’s an advocate, which is again only acceptable for those who agree with Lublin. Overbearing, arrogant, and utterly hypocritical. Throw in anti-labor and you’ve got a full matching set of asshole tendencies there.

Then Gebbia responds to Lublin to defend herself, and to make a perfectly reasonable argument for the status quo. 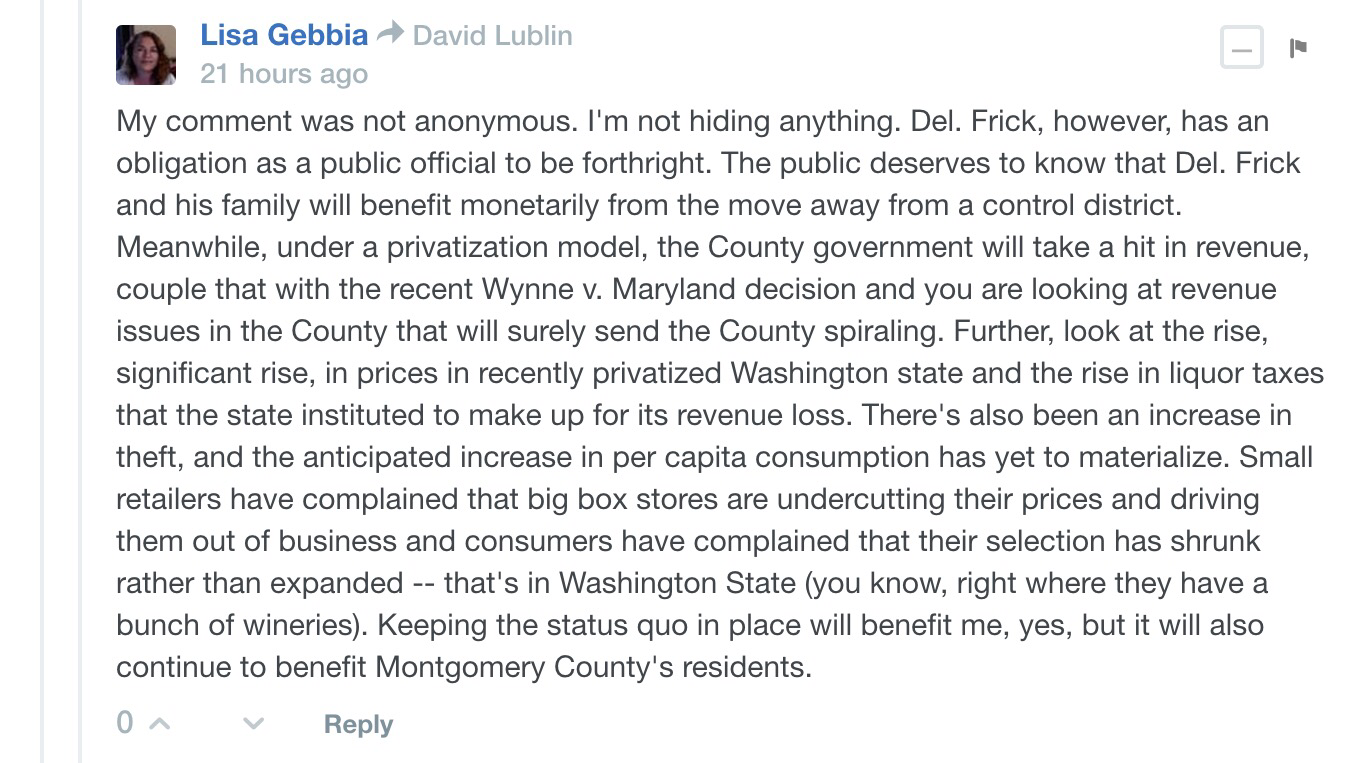 Does David Lublin engage in a reasoned, thoughtful discussion of this issue? You know the answer - of course not. Better to double down on the shouting and the bullying.

Only unions and union flacks can be criticized? Alcohol interests are pure and right and ready to sell a case of Zinfandel to David Lublin for $10 cheaper than DLC, so they’re good. Interesting policy framework there too.

You wouldn’t know there’s actually two sides to this argument. Lublin doesn’t want to discuss the issues, he wants to fight. Why does he care so much about alcohol sales? Is he really put out that much by the inconvenience and inefficiencies of the current system? With everything else going on in this county - see above - why is this the single issue that currently has David Lublin in an angry and petulant rage?

The last thing that had him upset - the Chevy Chase elections - it turned out that Lublin had a strong personal interest in the prior administration because of his having been mayor of the Town when it took a rejectionist position on the Purple Line. The new crew may well release all the documents relating to the town’s anti-Purple Line actions, which would embarrass a whole bunch of people - starting with David Lublin. So he had and has a strong interest in discrediting the new group in power right off the bat. He never disclosed any of this in his obsessive reporting on the Chevy Chase elections, and Bethesda Magazine stopped using him as a source on the issue.

So I wouldn’t be surprised at all if it turns out that there’s more going on with the alcohol issue than just David Lublin having a fit of pique. I’m not saying there is, but his history and his reprehensible behavior give one reason for concern.

And whatever the reason, his means of engagement are totally unacceptable. He slashes and burns, he smears, and his style is designed to silence and intimidate, not to engage. I respect that there are a lot of people who are fed up with the alcohol monopoly in Montgomery County. I’m one of them. But we shouldn’t be making major policy changes on the basis of frustration and personal convenience. And throwing open the system and selling cheap licenses to any and all comers is just asking for trouble. A careful, reasoned approach to change is what’s needed, and advocates who can listen better than they can shout.

There’s a conversation to be had here - but I would respectfully suggest to alcohol reformers that letting David Lublin be your standard bearer is not going to win any friends for your side. He’s a poster boy for what’s wrong with our politics, helping to perpetuate the worst sycophantic aspects of a system crying out for real change, and for leadership willing to stand up for the county and fight for our needs now and for years into the future.

Whatever his style may appear to be from his blog and his personal demeanor, his attitude in the comments I’ve highlighted are indefensible and reprehensible. We don’t need bullies and goons, we need people willing to engage in reasoned discourse about important issues we face. I don’t know how he rationalizes his appalling behavior with being a professor of government at American University. Is this the kind of behavior he’s teaching his undergraduate students? If I were an AU parent, and my kid had Lublin for a government class, I’d be asking for a refund.