No big surprise, but Valerie Ervin is now a filed candidate for Congress in CD8. She filed yesterday, July 1. Her first fundraising report will not be due until October 15, with a cutoff of September 30.

Yesterday at 5:52 p.m., while we were all being deluged with fundraising emails, Valerie Ervin officially announced that she is running for Congress in CD8. Here’s her Facebook version.

Valerie Ervin’s first campaign web video is out as the month of July dawns. Let the third quarter begin!

Valerie Ervin apparently announced her candidacy for Congress in a speech at Georgetown University tonight. So says a Facebook post by DeRionne Pollard: An interesting way to announce - Friday night in DC. I’m assuming something more formal and local will be coming, but for now this is newsworthy.

At this point, it appears clear that (1) Valerie Ervin is going to run for Congress in CD8, but (2) she’s not going to announce until after June 30, the looming FEC second quarter cutoff date. And today comes confirmation of both these points. From Facebook just about an hour ago: 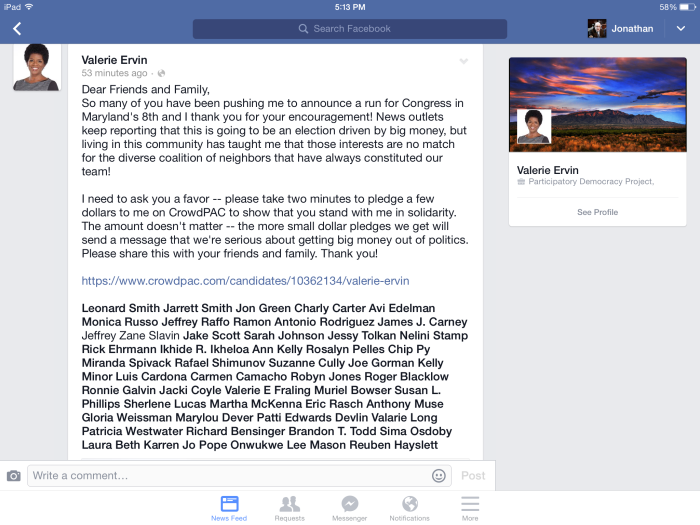 Expect a filing from Ervin the first week in July, I’m guessing.

One complaint, and it’s not at all directed at Valerie or any other candidate. The problem is with CrowdPAC.

CrowdPAC lists all five filed candidates (Barve, Gutierrez, Jawando, Matthews and Raskin) in addition to Ervin. They allow donations to each candidate through their portal. That too is fine. But they aren’t keeping it updated - the links for both Ana Sol Gutierrez and Kathleen Matthews have the statement “With Crowdpac, you can support Kathleen Matthews’s campaign even before she formally announces as a candidate. Your card will only be charged if she decides to run.”
Photo:

The problem here is that Gutierrez filed a month and a half ago, on May 11. Matthews filed three weeks ago, on June 3. Are donors to CrowdPAC, thinking they’re showing support, actually being charged for donations?  I would suspect yes, but can’t say for sure. But I certainly know that CrowdPAC needs to do a better job of updating these pages than this.

Word has it this morning that Valerie Ervin was at the Frederick County Jefferson Jackson Dinner last night, sitting with Congresswoman Donna Edwards, and introducing herself to Frederick Dems as “ready to run.” Sources tell me Ervin intends to make the announcement next week.

If she files by, say, Friday, June 12, she will have approximately two and a half weeks to raise money before the June 30 second quarter cutoff. Given the rumors of her alleged difficulties with financial commitments, her July 15 FEC report will then become one of the most anticipated numbers of the season. Don’t be shocked if she “announces,” but waits to formally file until after June 30. Then she can defer any financial report until October. Just a thought, but we will see very soon, it appears.

As promised, I have compiled a chart of the state level political contributions made by each candidate for Senate, CD4 and CD8. Only donations by individuals are counted here. It doesn’t purport to be an exact science - elected officials like Chris Van Hollen have donated large quantities of money through the DCCC, PACs and slates, but I didn’t want to make the work any harder for my diligent research assistant (or me, for that matter) so I drew an arbitrary line at individual contributions.

Also note that the state database only goes back to 1999. Contributions prior to that date will not show up on this search.

Detailed lists are attached for each race.

Valerie Ervin is fundraising on Crowdpac. My attention was directed to this tweet from Wednesday by an alert reader.

Is this an indication of a true “testing the waters” phase, or a sign of Ervin’s imminent entry into the race? My Magic 8-Ball says: “Signs Unclear. Ask Again Next Week.”

For those of us playing the home version of the game, things have gotten messy. So being spring, it’s time for a clean start with a fresh new scoresheet.

* Declared as candidates, but have yet to file with the FEC

My man Lou Peck is reporting this morning in Bethesda Magazine that District 18 Delegate Ana Sol Gutierrez will file her candidacy papers with the FEC today.

“I am very much running as a Latina representing the Latino issues at the national level,” Gutierrez said in an interview Thursday, adding that she is benefiting from “a huge interest among groups who want to raise the number of Latinos at the federal level.”

Also in the article are quotes from other potential candidates.

Valerie Ervin expects to make an announcement this month.

“I’m very close right now. We’re getting unbelievable response. I am putting a team together and we’re going to be making an announcement at some point in the very near future,” she said of her plans.

“I’m having active discussions with my friends in labor about the opening. There’s a strong desire for a candidate who will speak about economic justice issues and supporting our working families.” He is expected to reach a decision by the end of May.

“It’s a difficult decision and I want to take my time,” she said. “I wouldn’t be the frontrunner in the field, so I have time to decide whether I want to get in. The big question, of course, is the money—unfortunate, but that’s the reality.”

The only known prospective candidate not quoted by Peck is Marriott executive and former Channel 7 news anchor Kathleen Matthews.

Yet another potential candidate, Marriott International executive Kathleen Matthews of Chevy Chase, did not return a call seeking comment. But sources said Matthews, a one-time news anchor at Washington, D.C.-based WJLA/Channel 7, has been making the rounds of groups who are potential sources of funding in the contest.