Delegate Jay Walker has been mentioned for some time as a potential candidate in CD4. Today he announced his decision not to run. Still holding at seven candidates. Brown, Christopher, Davis, Ivey, Pena-Melnyk, Thornton and  Turner. 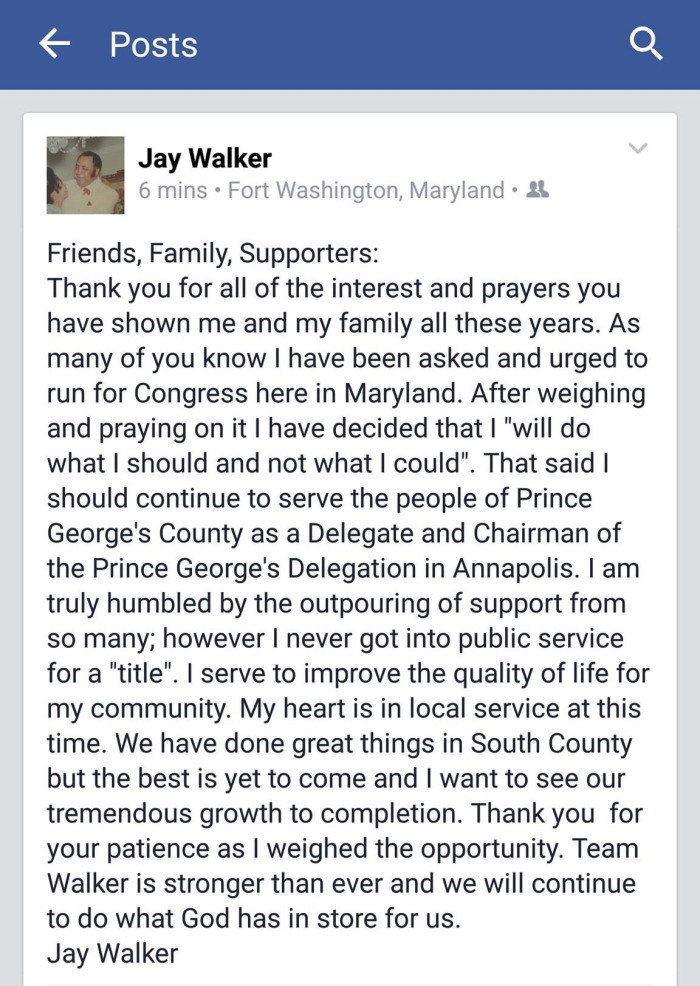 For those of us playing the home version of the game, things have gotten messy. So being spring, it’s time for a clean start with a fresh new scoresheet.

* Declared as candidates, but have yet to file with the FEC

If your dream is to hear my scrambled ramblings straight from the horse’s mouth, then consider your reveries fulfilled (although you really should see somebody about this!). Last night, I was on the PGCBlog radio show, along with political analyst (and friend of the Scramble) Neal Carter and Gazette reporter Holden Wilen, discussing the CD4 race. The host is Cheryl “Ceemac” Ingraham.

I don’t come in until a little bit after the 30 minute mark, but the whole conversation is enlightening and entertaining. For those who know me, this is not news, but for the rest of you, news bulletin: I like to talk. A lot. As in, all the time. By my standards, I was VERY restrained tonight. We’ll see what happens if I get some other chances to do this. I’ll do my best to call ’em like I see ’em, and to occasionally shut the hell up and let someone else talk.

Really and truly, not just a line here, but damn, that was FUN.

To think that a month ago, Maryland 2016 was going to be a sleepy little remote outpost. Hillary Clinton or another Democrat would win the state’s 10 electoral votes, Barbara Mikulski was going to be reelected for another term, and everyone would be focused on reclaiming the governor’s seat in 2018.

Well. Wherever we are now, it ain’t that place. It being the end of the month, here’s a summary post of every race that Barbara Mikulski’s March 2 retirement announcement has spawned. Not to mention the very existence of this humble and nefarious nest of rumors and whispers. Thank you, Senator Barb.

If a candidate has declared themselves not running, I’m not going to keep listing that. I’m only listing the ones with “??” who have been identified as interested and haven’t said no. I’m also leaving out CD3, CD6 and CD7 - for now - because the incumbents haven’t definitively declared for the Senate race yet.

The candidates are listed in alphabetical order in each race. No favoritism should be assumed or implied. Not valid in Indiana, Oklahoma, Alabama or where prohibited by law (didja catch the very topical LGBT references there? Y’all have to stay sharp to keep up with just how damn witty I am).

Anthony Brown IN
Glenn Ivey IN
Anthony Muse ??
Joseline Pena-Melnyk IN
Ingrid Turner IN (thanks, Mollie Byron, for pointing out my oversight)
Jay Walker ??

* Both Cummings and Ervin are expected to declare their candidacies in the very near future.

** I don’t actually believe Ruppersberger is running. But certain national publications persist in listing him, so what the hell, right?

*** Bill Frick has been rumored to be considering both the CD6 race and more recently, the CD8 contest.

So 21 candidates, 3 races. The prospect of a bunch more if CD1, CD2, CD3, CD6 and CD7 all open up (yes, I hate the Oxford comma. Sue me). All of the candidates thus far - other than Kathleen Matthews - are either present or former officeholders. If they all run, the reverberations of this earthquake will be felt for an entire generation - the last time something like this happened was 1986. How long ago was that? I was 23 years old, a year out of college and still had some hair on my head. Yeah, that long ago.

392 days until the primary. This is gonna be one crazy, insane and AWESOME ride. Hang with me and let’s have some fun.

To absolutely no one’s surprise, Jamie Raskin is running for Congress in CD8. Michael Dresser in the Sun has the scoop. But Raskin’ll “formally announce his race in April.” So I guess this is an informal report of an informal announcement. I’ll have balloons and cake (and a better breakfast) in April too. Fair is fair.

Now there’s two candidates in the race. I set the over/under right now at around 4-5. I’m pretty sure I’d take the under on 6; below that I’m not certain.

In any event, anyone who didn’t see the Raskin candidacy coming has not been paying attention. Bad reader. Bad.

Prince George’s Delegate Jay Walker announced an “exploratory committee” in CD4 last week. It’s on his FB page. We’re not friends (well, I never!) so if you are, you can go read it. March 18. All I have is a blurry screenshot which will just make your eyes hurt. You’re welcome.

I’ve been inadvertently leaving Anthony Muse out of my recent CD4 list. Not intentional - he is a serious challenger if he runs.

Either today or tomorrow I will have a post up about the deep ancient history  and rivalries driving the decision-making in the Senate race. You thought high school was bad? Combine Annapolis and Washington, let sit for as much as 30-40 years in a stew of personal and institutional rivalries, and watch the bitterness bubble over. Serve with generous helpings of popcorn and beer. Ooooh, fun. Can’t wait.

Let’s talk about name recognition in congressional races. How well known are the candidates to their prospective electorates?

As I pass silently through the tunnels listening to rumors and innuendo, I’ve heard it said that “everyone knows” this or that potential candidate and that the candidate has 75% name recognition. Or some equally preposterous notion.

Not a chance, boys and girls. I would bet good money that nobody - not one candidate in any congressional race - starts out with name recognition of even 30%. Anybody wanna take that bet against me?

The problem is that between activists and lobbyists and friends and staff, there’s an apparently large number of people that lead us to think that we know “everyone.” Well, yes, but that group - what Blair Lee once famously called the Golden 5000 who track politics daily (personally, I prefer several times per hour) - is exceedingly small when compared with a congressional or statewide electorate. Those who think otherwise are due for a bucket of cold water to the face when the reality sets in.

A little personal anecdote here. When I ran for delegate last year, I started with the idea that I “knew everyone.” I’d been around local and state politics and campaigns for over a decade, so of course this was true.

I believed this right up until the day I pulled a likely voter list for my own precinct, and found that I knew maybe 15% of the names. That exploded the myth for me. Which was humbling, and good - it made me work harder.

Shocking as it is to us political obsessives, there’s a whole universe of people out there who don’t know their elected officials and don’t care about politics. But they still vote, and in presidential years (1) there’s more of them and (2) they have even less familiarity with their state and local electeds. It’s OK, just breathe slowly through your nose - the nausea will pass. I promise. But the sooner the reality sets in, the better for your favorite candidate’s chances of running a strong race.

Have a good Tuesday. If that’s even possible. And finally, a Maryland Scramble Happy Birthday shoutout to Montgomery County Delegate Bonnie Cullison.